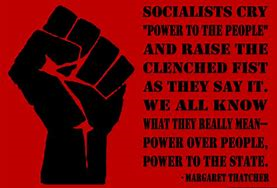 While I consider myself to be dead center on most issues, (I am neither right or left and despise labels) I have the ability to weigh and measure issues looking at all sides.  And one thing for which I am certain, is that Socialism will never be good for the United States of America.

The USA has always been and continues to be the Land of Opportunity.  Do not believe those who would have you believe any differently.  Unfortunately we have moved from a country of brave men and women who understood that no, this country wouldn’t take care of you or even be nice to you.  But if you were willing to bust your butt, deal with the lack of support and push forward, you could make a life.  Immigrants have never been treated well and while that might not be nice, millions of people went on to achieve great success.

My family is the perfect example.  My grandparents were immigrants who came legally but were essentially illiterate.  After several years in the country working in menial, “blue-collar” jobs they saved enough money and opened up clothing stores.  They were smart but didn’t have the opportunities in Europe that this country had to offer.  So when they finally were in a place that mistreated them in some ways but still afforded them opportunity, they thrived.  They didn’t cry or complain, would never have taken a handout, (they were too proud, for better or worse) and worked 14 hour days, six days a week.  That would never fly in Europe or the rest of the world but that’s why the USA isn’t the rest of the world.  That’s why the world’s disenfranchised continue to seek refuge here.  We must always welcome immigrants as they are on the same journey that our ancestors were on.  I will address this in another post.  However, those newly arriving immigrants will thrive under a system that expects of them not takes care of them.

There is one main difference between Republicans and Democrats.  It’s true that Republicans don’t believe in free education, free health insurance, free housing, a guaranteed wage, free, free ,free.  That’s because there is no such thing as free.  The US of A did not become the economic powerhouse that she is, the number one economy in the world because of Socialism.  In fact, the opposite is true.  Socialism at its core breeds dependency and NO ONE SHOULD STRIVE TO BE DEPENDENT!!!.  That should never be a goal.  The social contract, welfare and other social programs should only be a means to an end.  Only break the glass in case of an emergency.  Americans have never depended on government because they are the government.   We are great because our citizens have always been great.

On the other hand, Democrats now promise a carefree life with the government providing for all your needs and the citizen need not worry about anything because the Government, Big Brother, will take care of you.  You see, liberals want to keep the poor and immigrants downtrodden and left out in order to hold onto their power.  We give those less fortunate just enough to allow them to subsist and dependent and they will keep voting for us and keep us in power.  Is that the vision for America that anyone really wants?

America’s greatness will only continue if we insist that everyone excels to the best of the ability.  That we insist that people strive for greatness, whatever that means.  Struggle breeds success not giving things away “for Free”.  Has anyone ever wondered why so many children of rich parents turn out so badly?  Case after case of drug addicted rich kids running around.  It’s because they didn’t earn their success.  I saw it growing up and it’s no different today. These kids just live off mommy and daddy like leeches off the blood of their hosts.  This is not now and has never been a formula for success.

America has a lot to answer for; the treatment of native Americans, slavery, the treatment of women, and involvement in wars that we should never been involved in to name just a few but not making it easy for people is not one of them.  Nothing worthwhile is easy.  The struggle makes the taste of success sweeter.  So before we all start talking about how we should become more socialist let’s look at the fact that Bernie Sanders owns homes and property not because the government gave him free stuff but despite the fact it didn’t.