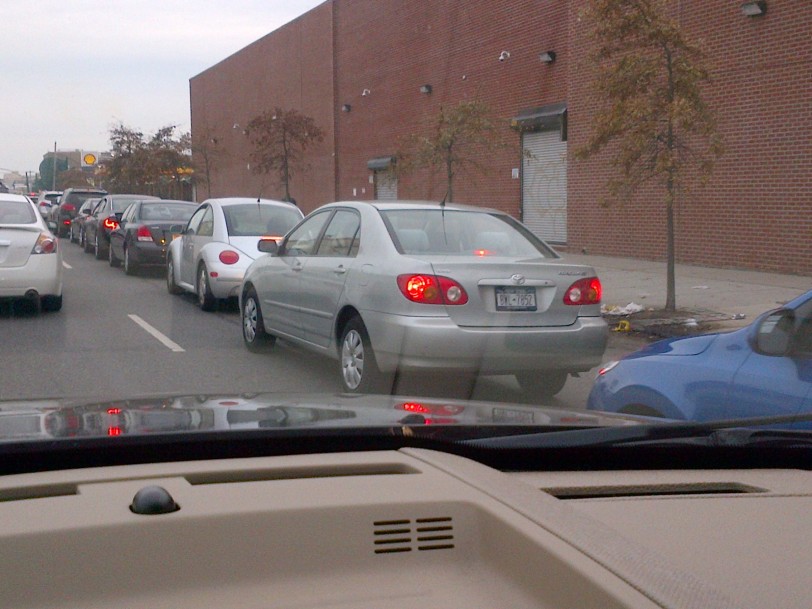 It’s been two weeks since the start of Hurricane Sandy.  So I decided to go to some of the hardest hit areas and see how neighborhoods and people are fairing.  Before I was able to drive two blocks from my home in Brooklyn, I was stopped.  I live in a very quiet residential neighborhood so I was surprised that no one was moving.  As it turns out the street I was on, was closed due to downed power lines that were compromised after the hurricane and subsequent snowstorm.  Once I was able to pass that area, ten minutes later, things did not improve.  As I approached the first gas station, and despite rationing, the line of cars waiting to fill up, was many blocks long.   The cars then end up impeding the traffic in the passing lane and it becomes gridlocked.  Station after station faced long lineups.  It took me one hour to drive 3 miles (5km).  The congestion and confusion, is frustrating.  Emergency vehicles, are everywhere, which is a good thing, but often cause congestion as well.  When I finally arrived at Manhattan Beach, in Brooklyn, I discovered many are still without electricity or heat.  Many of the streets were still covered with sand and mud that will probably take months to cleanup.  Although most people are taking it in stride, people are tired.   The Rockaways are still in the same condition, no power or heat.  Only those with generators are living in their homes.  Block after block, it’s just incredible how Sandy spared no one in this neighborhood.  I was with friends last evening from the Rockaways who have spent nights at friends and family, in hotels and are now renting an apartment.  It’s difficult to be displaced from your home, to lose so many precious possessions and memories.  Chatter flows from optimism to despair and back in an instant, almost as still in shock, two weeks later.  FEMA has been doing a great job helping people with essentials and that’s been a positive.  But for many, they won’t be back in the homes for weeks or months.  As this story of Sandy wanes and eventually Peters out, thousands will still be dealing with the aftermath.  We must not forget them.