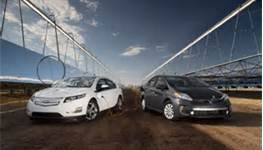 This week I rented a Toyota Prius while traveling and was quite interested in comparing it to my Chevrolet Volt.  Upon first setting eyes on my 2013 Prius, the first thing I thought was how unattractive it is.  The Volt is much prettier, so I won’t go any further.  However, once I sat in the Prius, I was quite impressed.  The inside felt much larger than it looks from the exterior.  The bucket seats were firm and supportive and the back seat was ample for two adults.  A third person could be squeezed in but it would be tight.  The controls took some getting used to as there is no park on the gear shift per se.  Park is a button that needs to be pressed.  That was easy enough.  The GPS was simple to use.  The car was technologically very sophisticated and I was impressed with all of the information provided.  However, the technology in the Volt is impressive as well.  The seats in the Volt are also very firm and supportive but due to the battery running down the center of the car there is room for only two people in the rear seat.  Space definitely goes to the Prius.  Trunk space was similar, both vehicles being hatchbacks.  In terms of mileage, on one trip during the week I drove 31 miles, 50km in stop and go traffic and averaged just over 50 miles per gallon.  Of course since the car is a pure hybrid, I did use some gas.  The Volt, on the same length trip and in the same weather conditions, would have easily made the trip on only electricity which would have cost under $1.00 and been equivalent to 250+ mpg.  Once the Volt depletes its battery however, the mileage would be closer to that of the Prius and slightly less.  The Volt will get 40+ miles per gallon, depending on how it’s driven.  Handling easily goes to the Volt.  The Prius not only doesn’t handle well, it’s incredibly slow.  The car gives the sense that it doesn’t want to go fast or be driven.  At highway speeds the car slows quickly when you let up on the gas.  The Volt handles beautifully, particularly in Sport Mode.  The pickup is impressive and just what one would expect with one gear and 280 ft-lbs of low-end torque.  The handling is tight and sure.  The cars are in completely different leagues in this area.  I did not enjoy driving the Prius. It is not a drivers car.  It’s one of the main complaints that car enthusiasts have about EVs and when referring to the Prius, they would be correct.  Finally, the ride on the Volt is far more refined.  It drives more like an expensive luxury car but it should, considering it costs on average, $10,000 more than the Prius.  Overall, the Volt is a better more refined vehicle, especially if you want 30 to 50 miles on pure electricity.  However, the $10,000 price difference may be enough reason to purchase the Prius.