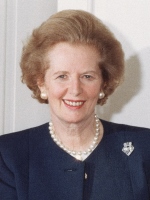 A song about Margaret Thatcher the “Iron Lady” negatively depicting the former Prime Minister, has debuted at number 2, in the UK, barely missing the number one spot.  The unflattering song whose words are set to the music of the Wizard of Oz’s “Ding Dong the Witch is Dead” has been popular on-line by liberals who wish to depict her as uncaring and evil.  But the hatred of Thatcher is more about misogyny than truth. Yes Margaret Thatcher was a very tough, focused, no-nonsense leader but so was Winston Churchill.  Other than the fact he was an alcoholic, no one said the kinds of things being thrown at Thatcher.  And Churchill was every bit as tough and mean as she.  At times, Churchill was completely out of control.  But even today, historians have mostly positive things to say about the controversial leader.  Most of the things being said and posted, are propaganda and lies.  They are a matter of opinion and are only true if you sit on the left side of the political spectrum.  Some of those things include, she hated kids, England’s poor and the environment.  All completely untrue.  But she was a conservative and differed greatly in her opinion of how to help England and the economy.  She didn’t believe in handing out money to people who, for some reason, think the government exists to support them.  No, she absolutely did not believe in the “Entitlement Economy”.  That is true.  She famously once said “the problem with Socialism is what do you do when you run out of other people’s money?”  She was also criticized for her close relationship with Ronald Reagan but together, they made the world a safer place.  She backed Reagan and his tough stance with the former Soviet Union.  She was a great friend and ally of the United States and for that she should be commended.  Many of those criticizing her were either small children or not yet born during the height of Thatcher’s rule, so I am unsure as to why they are upset with her.  Misery loves company I suppose.  British singer Morrisey, frontman for the Smith’s, an alternative rock band formed in 1982, said, “Iron no, Barbaric, yes.” Of course, Morrisey is simply looking for some publicity in what amounted to an unspectacular career.  In the UK, the Smith’s had limited success but outside the UK they were virtually unknown.  The utter disrespect by the leftist liberals, equates well to what we would expect from the fascists on the right; both equally dangerous.  ALL EXTREMISTS ARE FASCISTS!!  Margaret Thatcher, served as a strong role model for all those women, around the world living under oppression. She led her country with Conviction, Dignity, Strength and Purpose.  Rest in Peace!!