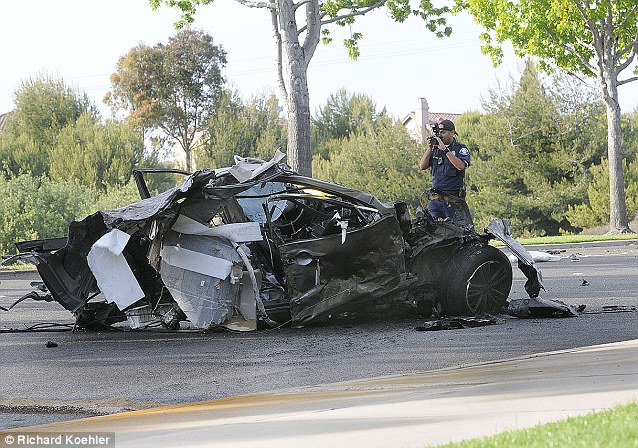 In what was described as an “horrific crash”, five teens lost their lives in another senseless speeding incident.  The five teens killed in the accident in Newport Beach California, were all from Irvine.  The driver, Abdulrahman M. Alyahyan, was a Saudi Arabian Native who applied for but never received a driver’s license because he failed to provide the proper documentation according to Mail Online. The passengers included 17-year-old Robin Cabrera, a senior at Irvine High, and her 16-year-old sister Aurora, a sophomore at the same school.  Also killed in the Monday crash were Cecilia Zamora and Nozad Al Hamawendi, both 17-year-old juniors at Irvine High. According to authorities, who are still investigating the one car crash, fingerprints were being used to identify the three girls and two boys who were killed. Police spokeswoman, Kathy Lowe called the crash the “city’s worst in recent memory.”  She said the vehicle, an Infiniti, was heading south on Jamboree Road in the direction of Pacific Coast Highway when it veered off the road and into the center divider. It struck a tree, broke apart and burst into flames.  Four of the occupants were ejected from the vehicle and one was partially ejected according to police.  The Los Angeles Times reported that Newport Fire Captain, Glenn White, who was on duty at the Balboa fire station, said that “rescuers were dispatched at 5:23 p.m. after an initial report of a multiple-vehicle crash with the possibility of pedestrians being struck.”  He continued, “When we arrived we found what we thought were two vehicles, one was on fire.  I’ve been on duty for almost 30 years, and I’ve seen some terrible vehicular accidents,” White said. “This was, if not the worst, one of the worst I’ve ever seen.”  Unfortunately, it appears that parents will never learn that a vehicle in the hands of many teenagers may prove to be their coffins.  Parents need to be better in touch with their children and should understand what they are capable of doing.  Further to that, one would think there would one be at least one teen in the car who might have an understanding about the danger of high-speed driving.  The fact that five teens are now dead, means that none of them had a drop of common sense and that is the fault of the parents who are now arranging funerals instead of high school graduation parties.  Parents must start saying no to their kids if they love them and want to save them.  No seventeen year old should be driving his or her daddy’s Infiniti.  That’s not what good parenting is about.  In fact, it’s just the opposite.  Allowing children to show off something they don’t earn or deserve is about the poorest lesson a parent can teach.  Money is just money.  And no matter how much the parents of these kids have, it can’t bring them back.  It’s time parents begin saving their children from themselves.