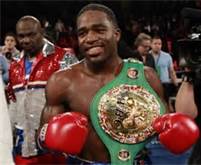 With support for boxing in the U.S. waning, the last thing boxing needs is another street hood with gold teeth.  At the age of 23, Broner has all kids of talent although he was less than impressive in taking the WBA Welterweight title from Paulie Malignaggi on Saturday night.  Malignaggi fought far better than expected, Broner worse than expected.  At 23 and in great physical condition, Broner should have pushed the action, he landed some good combinations but was not as busy as he should have been.  To Malignaggi’s detriment, he has absolutely no power.  In fact, he may be the poorest puncher ever to hold a major title in the history of boxing.  Never do his opponents look dazed or confused.  He simply outworks his opponents and throws all kinds of punches from different angles.  Broner, did at times look confused, unable to get off his punches as he would have liked or expected.  It was an entertaining fight, although the fight itself was not the biggest story.  The fight outside the ring was just as intriguing but it showed Broner to be a young kid, long on talent but short on class.  Ok, the hair brushing thing is fine.  But he is unhumble and that is unusual in the fight game.  He just won another title after stepping up two weight classes and he should have understood the enormity of the accomplishment.  Mike Tyson once tried to help a boxer to his feet after having just knocking him off his feet and out.  That’s what Cus taught him.  Had he lived, Tyson might have gone on to become the greatest heavyweight of all time.  It’s time for Broner’s father to step in and pull in the reins on his loud mouthed son.  Although I suspect the apple doesn’t fall far from the tree.  And make no mistake, we’re not talking about Ali loud mouth, just loud mouth.  It’s always amazed me how fighters like Arturo Gatti and Mickey Ward could beat each other’s brains in, only to become best friends.  It’s because in the end, it’s not personal.  The two combatants have tremendous respect for each other.  Broner has yet to learn that lesson.  After the fight, Broner said, he was leaving Brooklyn with Malignaggi’s belt and his girl; a reference to a story he told at the press conference before the fight regarding Malignaggi hitting his ex-girlfriend.  Broner claimed she was now his girlfriend.  Whether or not the story is true makes no difference.  This is not professional wrestling.  It’s professional boxing; the sweet science.  Broner at the age of 23 has the chance to become one of the greats.  Let’s hope as he grows and matures, his demeanor improves with his ability.