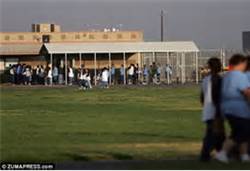 A recently released report from The Center For Investigative Reporting states that female prison inmates in California were sterilized without state approval.  Specifically, the report said “doctors under contract with the California Department of Corrections and Rehabilitation sterilized nearly 150 female inmates from 2006 to 2010 without required state approvals.” The report points to coercion by those on staff who strongly suggested to female prisoners who were most likely to return to prison, to have the tubal ligation procedure.  One female prisoner described her interaction with a doctor on staff, “as soon as he found out that I had five kids, he suggested that I look into getting it done. The closer I got to my due date, the more he talked about it,” said Christina Cordero, 34, who spent two years in prison for auto theft. “He made me feel like a bad mother if I didn’t do it.”  And that sums it up nicely.  The fact that she spent two years in prison for auto theft does make her a bad and unfit mother. Is there anyone who could feel sympathy for this woman? The fact she has five kids, is sad for those children.  Don’t they have the right not to have to be born to such a person?  And I’m certainly not interested in second chance nonsense.  You don’t get a second chance to screw up when children are involved.  One former female prisoner explained it best without even realizing it. Crystal Nguyen, a former Valley State Prison inmate who worked in the prison’s infirmary during 2007, said when referring to the doctors, “do they think they’re animals, and they don’t want them to breed anymore?” Well they may not be animals but they certainly shouldn’t be breeding.  It shouldn’t be wrong to say it and is about as truthful a statement as any person could make.  The truth should never be wrong no matter how hurtful.  A woman who serves time in prison has no business mothering children.  Just because she can, doesn’t mean she should.  Furthermore, there is no way a woman serving time can afford to raise those children which means the government is taking care of her and her offspring.  So if you’re middle class in this country you have to struggle to afford two children but if you’re poor and in jail you can have as many as you can give birth to?  Really? Where is the logic in that?  About the only fault here, is the fact that there was no required state approval to perform the procedures. That should not happen.  But if the government has the right to incarcerate you, it should have the right to tell you that you no longer have the right to ruin the lives of new human beings.  Anyone who disagrees is either a religious fanatic or just plain stupid.