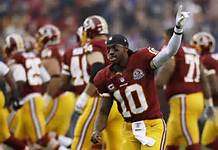 Redskins quarterback Robert Griffin Jr III, has been quoted in GQ Magazine saying the time for gay players to come out is now.  “I think there are [gay players] right now, and if they’re looking for a window to just come out, I mean, now is the window.”  The interview continues, “My view on it is, yes, I am a Christian, but to each his own. You do what you want to do. If some Christians want to look at being gay as a sin, then thinking about other women, committing adultery, or any of those other sins that are in the Bible, those are sins, too. And God looks at all of us the same way.”  Griffin is the voice of a young player, one of only 53 on his team, who believes that everyone should be able to live their lives openly without fear of retribution.  It is admirable and commendable but naive. Football players, approach the game as if it’s a war and in fact it is. There are pats on the butt for laying a guy out and that will not change.  No matter how open-minded some football players might be at this point, there are many others who just wouldn’t be supportive, and worse, would target those players.  Given the nature of the sport, it would be very difficult to penalize them for doing exactly what they’re supposed to be doing as part of their job.  The football player mentality as a whole, is not conducive to broad-minded thinking.  Many of the players come from rough neighborhoods where being gay is punishable and the word “faggot” part of everyday vocabulary.  Football has not evolved enough at this point for any single player to risk his career and respect and support of his fellow teammates and opposing players.  So it’s highly unlikely active player would be willing to expose himself to that type of scrutiny.  It simply won’t happen at this point in time.