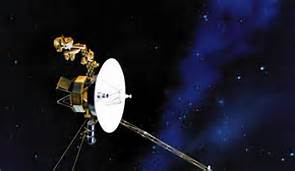 In what can only be deemed a “fantastic voyage”, NASA’s Voyager Probe, launched in 1977, has officially left the solar system.  Voyager and Voyager 2 were originally launched to study the outer planets but they have continued on their journey and both continue to communicate with their creators.  Voyager 1 is now approximately 12 billion miles from earth (19 billion km).  It is so far away at this point that it takes 17 hours for a radio signal from Voyager to reach earth.  It is an incredible milestone not unlike the discovery of the “New World”.  Chief Scientist, Professor Ed Stone, described this journey as “a key milestone that we’d been hoping we would reach when we started this project over 40 years ago; that we would get a spacecraft into interstellar space.”  He explained it to BBC News stating that, “Scientifically it’s a major milestone, but also historically – this is one of those journeys of exploration like circumnavigating the globe for the first time or having a footprint on the Moon for the first time. This is the first time
we’ve begun to explore the space between the stars.”  The original intent of the mission; to study the planets Jupiter, Saturn, Uranus and Neptune, was completed in 1989.  Scientists then steered the probe towards deep space where it has been traveling until reaching this milestone.  But even at 100,000 mph (162,000kph), Voyager will not reach another star for 40,000 years.  According to NASA scientists, both Voyager 1 and Voyager 2 should have enough plutonium power, which supplies electricity, for the next 10 years. At that point, their instruments and their 20W transmitters will die.  This mission and it’s voyage into inter-stellar space is nothing short of extraordinary.  Renowned British planetary scientist, Prof Fred Taylor commented by recalling, “As a young post-doc, I went to (NASA’s Jet Propulsion Laboratory) and worked for a while with the team that was doing the science definition study for the Outer Planets Grand Tour, which later became Voyager.  It seemed so incredible and exciting to think we would see and explore Jupiter and Saturn close up, let alone Uranus and Neptune.”  He continued, “The idea that the spacecraft would then exit the Solar System altogether was so way out, figuratively as well as literally, that we didn’t even discuss it then, although I suppose we knew it would happen someday. Forty-three years later, that day has arrived, and Voyager is still finding new frontiers.”