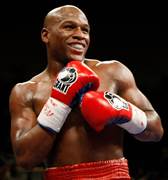 Although I can certainly appreciate the skills of Floyd Mayweather, I have never been a big fan for two reasons; 1) his flamboyant and at times obnoxious personality although he’s mellowed with age.  And 2)  his boxing style.  What makes him so great is also what makes him unpleasant to watch.

Mayweather will undoubtedly go down as one of boxing’s all time greats but there is one thing missing from his portfolio, a defining fight.  Yes he knocked out Ricky Hatton but in the end he had little talent.  Cotto was probably his toughest fight but it wasn’t all that tough.  Sugar Ray Leonard had his Hearns and Duran.  Muhammad Ali had his Joe Frazier.  Arturo Gatti had his Mickey Ward.  But no one can be tied to Mayweather. No one will be able to look back at Mayweather’s career and say, “I remember that fight. What a great fight.”

There are those who would simply say that it’s not his fault he’s so much greater than any of his competition and perhaps they would have a point.  But that doesn’t negate the fact he hasn’t had that signature fight.  I believed Alvarez, due to his youth and tough fighting style might be the one to give Floyd a fight, I was completely incorrect.  His fight against Trout was a clear indication he might not be ready for prime time, which clearly he wasn’t.  If Mayweather fights Danny Garcia and or Gennady Golovkin and beats them as easily as he beat Alvarez, then we will have to believe he is just super human.  It would have been fun to see him fight Hearns, Leonard or even Duran but of course that will never happen.  It’s intriguing however; more intriguing than his actual career.

One final comment.  Mayweather can absolutely be considered the most intelligent fighter in history.  He will retire in the next two years, a hundred millionaire and will never have to worry about health issues since rarely has he been hit.  It hasn’t made for great fights but he’s been laughing all the way to the bank.