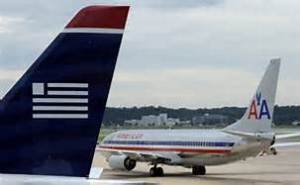 American Airlines and US Air have settled an antitrust lawsuit, paving the way for the long-awaited merger.  Both airlines claim it was necessary for their survival.  A judge must still approve the merger but that is only a technicality at this point.  In order to move the merger forward, the airlines had to agree to give up some of their gates at selected airports.  The US Justice Department sued to stop the $11 billion dollar merger saying it would further reduce competition.  Attorney General Eric Holder said in a statement, “This agreement has the potential to shift the landscape of the airline industry and ensures airline passengers will see more competition on nonstop and connecting routes throughout the country.”  The airlines agreed to give up 57 slots in both LGA-one of American’s hubs and Reagan-a US Air hub.  They also gave up a couple of gates in Boston, Chicago and Dallas.

Tom Horton, head of American Airline’s parent corporation, AMR, said in a statement, “This agreement allows us to take the final steps in creating the new American Airlines.”  AMR has been in bankruptcy for two years and desperately needed this merger in order to return to profitability.  American is in the process of bringing new aircraft on line with the eventual retirement of the MD-80 fleet which has grown tired and old.  As they age, maintenance becomes prohibitively expensive.  Planes don’t make money when they’re sitting on the ground.  The MD-80 is also not fuel-efficient thereby burning up revenue unnecessarily.  American, is also using smaller regional aircraft for flights to Minneapolis and Chicago which also improves profitability.  Smaller, fuel-efficient, full airplanes, equals profitability.  The company expects the merger to be completed by December of this year.