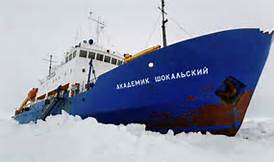 Update:  All 52 passengers aboard a ship trapped by ice in Antarctica for more than a week were rescued by helicopter early Thursday, according to officials.  A helicopter from a Chinese ice-breaking ship Xue Long transported the crew in group from the makeshift helipad which they helped create by flattening the landing area near the ship.  The Australian Maritime Safety Authority (AMSA) tweeted that all 52 passengers had been airlifted from the Akademik Shokalskiy and were now on board the Aurora Australis ice-breaker.  So ends the ironic journey for the climatologists who were in the Antarctic to gather information on climate change.

How ironic it is that Global Warming scientists attempting to demonstrate that climate change is leading to melting ice and rising sea levels have been trapped by the very ice they set out to prove is dissipating.  A third attempt to rescue the crew of scientists was  abandoned due to thick ice.  But despite the ice that has surrounded and trapped the ship, Chris Turney, a professor of climate change at Australia’s University of New South Wales, said it was “silly to suggest he and 73 others aboard the MV Akademic Shokalskiy were trapped in ice they’d sought to prove had melted.” He remained adamant that sea ice is melting, even as the ship remained trapped in its icy grip.

I’m not saying that there isn’t truth to climate change, (a more appropriate term than global warming) but there are many indications that all is not yet lost.  For example, despite dire predictions for a terrible hurricane season in 2013, not one major hurricane hit the mainland US.  It was in fact the quietest hurricane season on record.  It was also one of the quietest tornado seasons on record.  While there will always be anomalies, there is a pattern taking place even as the winter just begins in the northern hemisphere.  Two weeks ago I was in Minnesota and South Dakota,  The four days I spent there, I was trapped in the ice.  Not one day did the temperature rise above O degrees Farenheit.  December, despite predictions it would be warmer than normal in the U.S. turned out to be a very cold month and more artic, frigid cold and snow is on the way.  Of course one season does not a long-term pattern make but if temperatures in Alaska can still dive to -40F in December, than we have a long way to go before this planet is really in danger.

Finally, at this very moment the temperature in Fairbanks Alaska is -20 degrees Farenheit.  Are the photos that climatologists taking today vs. 50 years ago taken at the same exact time of year?  Perhaps the photos today are taken in summer and the photos then, were taken in winter.  But if anyone was to take photos today at the north pole, they would not see any signs of global warming.  The ice is thick and the terrain is as frozen and barren as it’s been in the last 100 years.  Maybe if human beings would stop breaking up the ice with their ships, the ice would have time to re-freeze and stay frozen, if that’s the goal.  Perhaps that will be something for our heroic scientists to think about as they’re being rescued by helicopter from their doomed ship.  Remember, it’s summer in the Antarctic now and while it will undoubtedly get a little warmer before it gets colder it’s still below freezing and snow is still falling. Again, I am in no way suggesting that climate change isn’t taking place, I’m simply saying that no one knows what the results will be.  After all, scientists still can’t figure out how to cure the common cold.