Ralph Lauren’s Niece: A Lesson In How Not To Behave On An Airplane 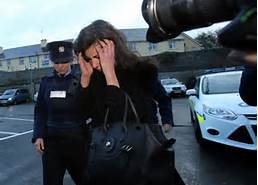 The niece of fashion mogul Ralph Lauren has been fined 2,000 euros ($2,718 USD) for pushing and swearing at a flight attendant on a Delta Airlines flight from Barcelona to New York’s JFK Airport.  Due to her inebriation and violent behavior the flight had to be diverted to Shannon airport in western Ireland.  According to the BBC, “The New York-based jewellery designer bit her lip and looked to the ground in the dock while a police inspector told the court she had been loud-mouthed, abusive and threatening on the aircraft.”  The plane was in the air for approximately 2 hours, when the flight attendant saw her crying in her seat.  When approached, she told her to “get out of my face” and when told to calm down she became more abusive.

In court, the prosecutor said that when the flight attendant went to the front of the aircraft to tell her supervisor, Ms. Lauren followed her through first class where “she ranted and shouted incoherently.”  According to the BBC,”She told the flight attendant she was going to go ballistic and pushed the air hostess hard and she hit her back against the wall of the aircraft,” the police officers said.  He said her “frightening experience” continued with Lauren calling her an “ugly, blonde bitch” and calling the senior flight attendant a “fat ugly, unhappy, blonde bitch”.  It was at that point that the Captain determined it prudent to land the plane in Shannon and to have the irate passenger removed.

Ms. Lauren admitted to being intoxicated and that it was reasonable to assume she might endanger herself or other persons on board the aircraft and to “breaching the peace by engaging in threatening, abusive or insulting behavior.”  Ms. Lauren’s attorney said “she was upset and embarrassed by her actions.”  The plane was carrying over two-hundred passengers and crew who were temporarily delayed in Ireland before completing the flight to JFK.