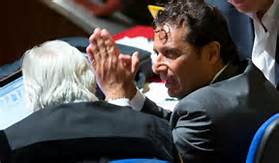 Although the Costa Concordia tragedy has moved from the front page to the back page more than two years after it occurred, Captain Francesco Schettino is currently on trial for multiple manslaughter charges, resulting from his careless and incompetent guidance of the ship, causing it to be too close to shore, striking the rocky bottom and partially sinking.  Thirty-two souls died as a result.  Compounding that incompetence is the fact he left his ship prior to all of the passengers and crew.  The trial, which began in July, continues.

At Schettino’s manslaughter trial, Carlo Galli, the head of the traffic police coordinating the rescue, told the court that “When I got to the rock where Schettino was, I told him I would take him back to Giglio port so he could get on a dinghy and be taken back to the Concordia, and get back on board if need be.”  Schettino refused his offer.  Schettino was sitting on shore and watching the rescue of passengers as they abandoned ship or struggled in the water.  When Galli again asked him if he wanted to return to the ship “He told me he had to stay, to supervise his ship. When I repeated the invitation to take him back, another officer from the ship said it was a good idea to try to get back on board. Schettino said no again,”  Of course he said no.  Any normal human being would say no to returning to a sinking ship.  However, he is not just a normal human being.  He is, or was, a ship’s captain.  That signifies or should signify a great responsibility.  He should have chosen to go down with the ship rather than watch from shore as events unfolded.  He claimed he had asked the person in charge of the lifeboat he was on when he first abandoned his ship if he could to return to it but was refused.  Schettino has always claimed that he fell in to the lifeboat and was not allowed to return which of course is nonsense.

The trial of Schettino will continue for many months as many more witnesses, possibly numbering in the hundreds will testify as to what happened on the night of January 14, 2012.  Those who died either drowned after jumping in to the sea or were trapped in the ship’s elevator.  One couple was found in their stateroom.  The one charge Schettino will not face, is the crime of cowardice.  Captains of ships take a solemn oath to protect the lives of their passengers and crews before their own.  The fact that he left the ship prior to everyone else being safely accounted for and the fact that he didn’t return to the ship given the chance, shows what a coward he is.  What he did is unforgivable.  He caused the accident and then abandoned ship leaving people on board to die.  Not only is it unforgivable, if convicted, he should face the death penalty but of course Europeans are far to civilized for that.  I jest of course.  But Schettino should be ostracized by the world for his disgraceful and unconscionable behavior.  No matter the outcome of his trial, to quote a line from a Twilight Zone episode, Schettino’s “final judgement will come from God.”