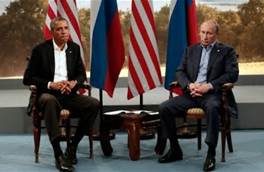 Rand Paul claims Crimea doesn’t matter and why should we care.  And in truth, he may be correct.  Crimea really doesn’t matter to the interests of the United States.  Most of the population of Crimea are Russians so it’s not a mystery why the vast majority would want to rejoin their Russian comrades.  In a perfect world there really should be no argument against such a unification.  So why does Crimea matter?

There really is only one answer to this question.  It matters if one believes in the concept of containment.  In 2014 containment is not about Communism but about Imperialist intentions.  If Russia simply wants to reunite Russians with Russia than we should leave this alone.  But if he has greater intentions, then it sets a bad precedent.  You don’t have to go back as far as hitler’s annexing of the Sudetenland to understand that when you allow bullies to take an inch, they will steal a mile.  Is the Ukraine next?  Is Poland and Romania on the agenda?  Just how far will Putin be willing to push NATO?  The answer is, only Putin knows the answers to those questions.  But one thing is certain, the only way….the only way to stop a bully is to punch him squarely between the eyes.  Draw blood and tears and the bully becomes passive.  Words will not be enough.

One thing has become abundantly clear throughout this crisis, Putin has no respect for President Obama.  He is making him look like the weak, impotent leader that he is.  He in no way fears or respects him and the President of the US can not execute a foreign policy when the bullies have no fear. This President is the weakest foreign policy President in the history of this nation.  He truly believed he would be able to talk the North Koreans in to relinquishing their nuclear ambitions with his charm and charisma.  He thought the Iranians would back down, (the jury is still out on the current agreement).  And he thought that Putin would back down on Crimea which clearly he has not.  In fact, Crimea is now part of Russia following the signing of a draft treaty by Putin.

I’m not saying that NATO can or should send in troops to face Putin in Crimea.  But what I am saying is that a line in the sand needs to be drawn now when it comes to the Ukraine.  If Putin has his sights set on the Ukraine, he needs to understand that it may well turn in to a conflict that he doesn’t want.  Anything less than that, will result in failure.  The question the President must now answer is whether or not he has the stuff it takes to draw that line.