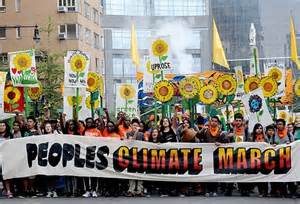 We recently saw more than 400,000 citizens protesting climate change.  There was signs about fracking, oil companies and pipelines but the message was completely unclear.  Obviously all of the marchers were there concerning climate change but what exactly the impact will be, remains to be seen.  Mass protests or marches are more about people wanting to be a part of something larger than themselves as opposed to an issue.  I was at game 4 of the 2001 world series, the first baseball game ever played in November and perhaps the most significant game ever played in baseball history.  I will forever speak of it and be a part of it.  Protests and marches are the same.  “I was there”.  Unfortunately, there will never be another Woodstock.

While I don’t pretend to be an expert on climate change, I would be willing to bet that the planet will still be here and people will still be skiing in North America in 50 years.  Now does that mean that we shouldn’t take climate change seriously?  Absolutely not.  But there are far greater immediate threats to our safety than climate change and that is Global Extremism.

Unlike Bill Maher, I don’t wish to tie this extremism to one group, particularly, Extreme Islam.  It is in fact not about Islam but about the disenfranchised.  If Islam was offering these extremists, alternatives, they would be choosing them instead of the murderous rampage taking place in Syria and Iraq.  There are 1.3 billion Muslims in the world.  The vast majority are not extremists.  This extremism is about power and control, not religion even though it takes that form.  All of the countries in the Middle East, all Muslim countries, are either Dictatorships or Monarchies.  Without a voice, rebellion eventually follows and that’s what’s happening.  The west again, as it usually does, miscalculated.  Libya, Iraq, Syria, were fine the way they were.  Their governments were brutal enough to keep the evil and bay.  We in the west must accept that we do not have an answer for that.  These governments created the evil by being brutal, autocratic, dictatorships.

So it is my contention that the world better focus it’s energy on these extremists far more intensely than worrying about the death of the planet by tidal wave.  We do not know where or when the next terrorist attack will happen but an attack is a certainty.  Dealing with these groups and there are many others besides IS and Al Qaeda, needs to be foremost on the world agenda.

Another hurricane season is passing and it has been one of the quietest seasons in the history of record keeping.  Tornado season in the U.S. plains was also historically quiet.  Of course it’s not about one season but a compilation of years but if the temperature in Minnesota can reach below zero degrees Farenheit, 40+ days in one winter(2013-2014), we probably have some time before the planet melts.  The same can not be said of global terrorism.  The threats to our security are immediate.  There are daily threats against New York, Chicago, LA and around the world.  It’s simply not reported in order to not cause panic.  Having just returned from England, that country and closest ally, is on high alert as the Brits believe, know, an attack is imminent.

One last time, I am not saying that climate change is not happening or is not a long-term threat but there is a more serious threat today and if the world does not unite to defeat that threat, there will be serious consequences.